India had to give up to England in the first test of the series that took place in Chennai. The hosts crumbled to Anderson’s reverse swing and Leach’s clinical spin and although Virat Kohli impressed with fighting half-half-century in the second innings.

England was successful in collapsing India for 192 all out in the fourth innings while James Anderson and Jack Leach produced memorable spells of bowling. This allows England to register a dominating 227-run win on Tuesday to take a 1-0 series lead.

A score of 381runs was on board with 9 wickets remaining for India to chase before the play started on Day 5. Kohli and Gill were the only positives in India’s batting while India lost Cheteshwar Pujara early.

The way Gill batted made it clear that India were fancying their chances of going for a win, but those plans were thwarted when Anderson sent Gill’s off-stump cart-wheeling right after the batsman reached his third Test fifty.

Anderson produced a beautiful in-swinger to castle India’s vice-captain Ajinkya Rahane for a duck. Rishabh Pant spanked a four off Anderson to calm some nerves, but opened the face of his bat a bit too much for the ball to take a leading edge and lob to Joe Root at covers.

Australia gets a huge victory in the first test against Pakistan 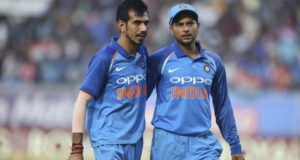