Krunal Pandya has left the bio-bubble to mark his presence with his family during the hard times, as his father Himanshu dies. It is so unfortunate for the demise and he would not be playing for Baroda team in the ongoing Indian T20 tournament.

Krunal’s brother and India’s all-rounder Hardik Pandya along with him have been occupied with their schedules, and now they had to return back home. Krunal is leading Baroda in the Syed Mushtaq Ali trophy, and has left the bio-bubble created for the tournament to be with his family.

Hardik Pandya is preparing for the white-ball series against England, and so is not playing the national T20 tournament. His father Himanshu had played a key role in the success of his cricketer sons.

Krunal scored a match-winning 76 in the opening game against Uttarakhand and has also taken four wickets in the first three games. Former India pacer Irfan Pathan took to Twitter and paid his condolences. 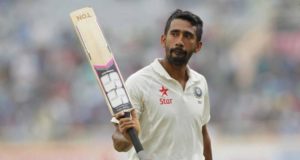 Wriddhiman Saha to do wicket-keeping duties for test series against South...