All the Indian cricketers who landed in Australia have already started outdoor training and gym sessions. The team and staff are currently serving the mandatory 14-day quarantine period upon the recent arrival to Sydney.

The team players have been permitted to begin their training session after being tested negative in their first COVID-19 Test. After a day of physical drills and fielding practice, the players were seen sweating it out in the nets.

The right-hand pacer Mohammed Shami was seen practicing hard in the nets for the upcoming limited-overs series against Australia. The schedule is set to start with the first ODI that takes place at Sydney Cricket Ground on November 27.

With the expectations rolling out on the probable-eleven, Shami is likely to be shortlisted. Besides, this Indian fast bowler has shared his practice video on Twitter, stating that he is looking forward to being a part of the series.

Shami’s performance during India’s tour of Australia in 2018-19 was outstanding. He was successful in picking up16 wickets in four Test matches and five wickets in three ODIs. The recent IPL 2020 was even better for this Kings XI Punjab fast bowler, with 20 wickets in the league stage.

The first two ODI’s will take place in Sydney on 27 Nov and 29 Nov respectively. The final ODI will be held in Canberra on December 2. Three T20Is are scheduled to start from December 4 following the 3 ODIs, while the Test series starts on December 17.

Trevor Bayliss is the new coach for Sunrisers Hyderabad 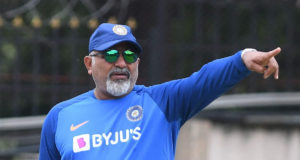