Needing to bat out 134 overs in their final innings to save the match, England managed to knock off 113.1 on the final day of the Day-Night Test in Adelaide but couldn’t prevent Australia from taking a 2-0 lead.

Leading the resolute resistance was Jos Buttler, who blocked his way for 207 balls before being dismissed in a dramatic fashion. Keen on defending, Buttler went too far back to tread onto his stumps giving Australia a big boost in the final session. Jhye Richardson finished with a five-wicket haul eventually as he had last man James Anderson fending to gully and giving Australia a 275-run win, after a lengthy rearguard action by England’s lower order.

Buttler was involved in a 190-ball association with Chris Woakes first before Ollie Robinson gave him support for 87 balls. Through both, Buttler had a single-minded devotion towards seeing the bowling off. Woakes, however, took a few more scoring opportunities, getting to 44 in his 97-ball stay. Australia bowled as many as eight bowlers over the course of the innings and rushed through overs with their part-timers before the second new ball became available. But Buttler and Woakes remained largely untroubled even then before the latter finally fell when Jhye Richardson managed to beat his defence with sharp movement in. 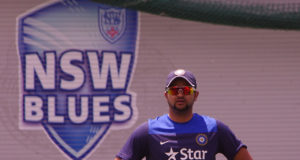